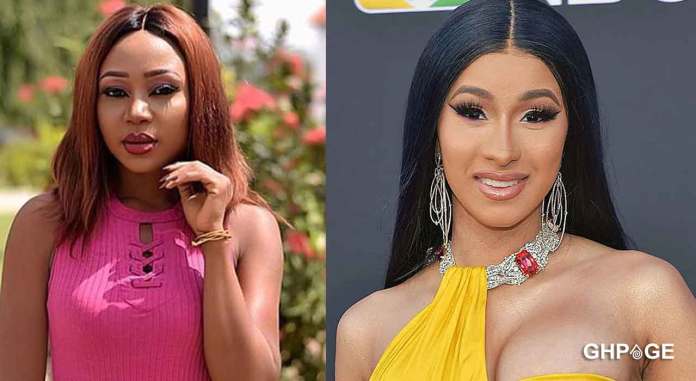 She mentoned that the popular American female rapper was following every story about her court case and played an instrumental role in her release from jail.

Poloo said the rapper call and text her personally to advice her about life and also encourage her amid the case.

“Cardi supported me, she gave me $30,000.00 which I used during my court case and advised me all the time,” Akuapem Poloo stated.

The socialite said her recent song which featured AMG Armani was influenced by Cardi B.

Akuapem Poloo however claims Cardi B has promised to feature her on a song if she works harder and improves her brand as a musician.

“Cardi wants to feature me and encourages me to keep producing music so I can build my potential,” Poloo claimed.

Ghanaian actress and model, Akuapem Poloo bron Rosemond Brown and Cardi B became close pals after both met at a Meet and Greet session with the Superstar.

Asempa fie
November 29, 2021
Award-winning musician Sista Afia, born Francisca Gawugah, has said that before becoming a star she used to sell waakye in...

Asempa fie
November 27, 2021
Imagine being distressed from the fact that anything could happen to your seriously ill mother who was not getting a...