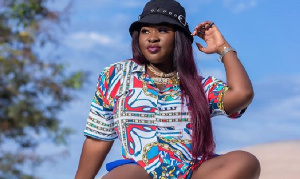 Award-winning musician Sista Afia, born Francisca Gawugah, has said that before becoming a star she used to sell waakye in the United Kingdom.

She was telling her grass to grace story on Accra-based Utv’s United Showbiz when she joined her colleagues for a live band session.

The songstress said apart from Waakye, she trained as a Nurse and practiced in two of the biggest hospitals In the United Kingdom.

“I studied health and social care, I went to the field, I worked in two big hospitals which are Reading Community hospital and Nottingham Hospital, that’s where I went to the University,” she indicated.

Asempa fie
January 20, 2022
An SHS girl has bravely exposed some of the ills going on in our various secondary schools. According to this...

Asempa fie
January 19, 2022
Black stars lost 3:2 to Comoros After the Black Stars of Ghana lost woefully to Comoros in their last group...

Asempa fie
January 19, 2022
Social media has allegedly been set on fire by a lady In the video, the lady in question joined the...

Asempa fie
January 12, 2022
Self-styled Ghanaian billionaire and socialite, Ibrah 1 who has turned into an overnight seer of God has dropped another serious...