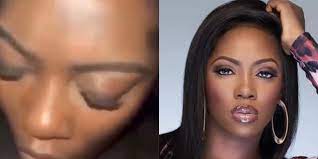 The leaked bonking tape captured a lady who looks just like Tiwa Savage enjoying herself in an intimate act with her lover.

It is not confirmed yet if the woman in the viral video is Tiwa Savage, but there is a striking resemblance.

Giving more credence to the video, was, Tiwa Savage announcing in an interview with American on Air Personality, Angie Martinez of Power 105.1, about the leaked tape which her blackmailer is using as a tool to demand huge sums of money.

Tiwa initially thought of succumbing to the blackmailer’s threat of paying but later decided to call the blackmailer’s bluff and push out her narrative, after all, that what she did in the said video is something natural.

Well, the blackmailer has finally released the tape Monday night with lots of reactions on social media.

Tiwa Savage on her IG story thinks she has been able to change the narrative by letting the world know about her tape before it is leaked by the blackmailer after she declined playing to the dictates of blackmailer.

She also believes her haters are ashamed after she was able to joke control and joke about something they felt would have destroyed and shamed her.

She wrote: “You hated how I was able to control the narrative and get ahead of a story before it consumed me and how im able to joke on stage about something you taught should destroy me and make me feel ashamed. You must knock my head when you see me other.”

There are some netizens who think all of these is a publicity stunt to promote her latest EP titled ‘Watta and Gari’.

See also  WATCH VIDEO: The problems I’m facing in my marriage are too much – Adwoa Saah laments

Asempa fie
November 29, 2021
Award-winning musician Sista Afia, born Francisca Gawugah, has said that before becoming a star she used to sell waakye in...

Asempa fie
November 27, 2021
Imagine being distressed from the fact that anything could happen to your seriously ill mother who was not getting a...