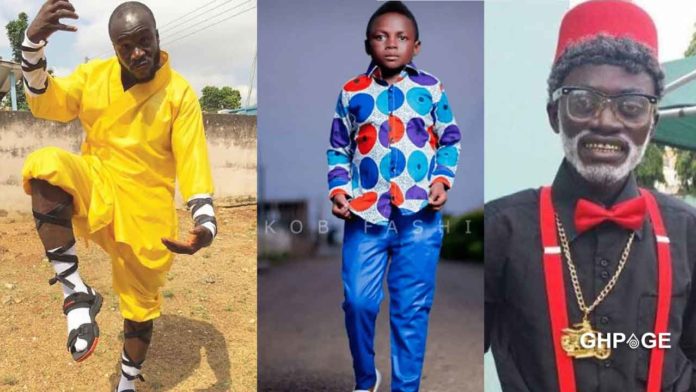 In the ensuing ‘beef’ between two of Kumawood’s most liked comic actors, Dr Likee and Lilwin, Yaw Dabo, another popular figure in the movie industry has shared his opinion on the subject.

According to him in an interview, the actor who is also famed by the name ‘Adwenkese3’ said people should respect the fact that it’s Ras Nene (Dr Likee’s) time to shine.

In the era where films are no longer being produced on CD’s, Youtube has taken over the market and good for Dr Likee he has been able to utilize that platform making him more famous now.

He explained that this is his season and there is time for everyone. Yaw Dabo, therefore, asserted that Lilwin should accept the fact that Likee is the man of the moment.

WATCH THE VIDEO BELOW;

He said this after Lilwin in an interview advised that people stop comparing him to his colleague Ras Nene aka Dr Likee because they are not of the same level.

In the exclusive interview Lil Win when asked about Likee stated without mincing words that they are all on a different level.

According to him, he is a legend in the industry, unlike Dr Likee who is just popular on Youtube.

He explained that comparing the two of them is wrong because they are both from different places.

Asempa fie
October 19, 2021
Nigerian singer Tiwa Savage has reacted to a viral video circulating purportedly involving her and her boyfriend having sex. The...

Asempa fie
October 12, 2021
Prince David Osei has declared support for the anti-LGBTQ bill and he cites God and biology to back his argument....

Asempa fie
October 12, 2021
Controversial media personality Afia Schwarzenegger has asserted that many Ghanaian celebrities secretly smoke weed in the comfort of their home...