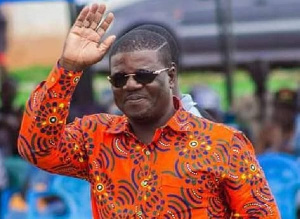 •He also criticized Professor Takyiwaa Manuh for some comments she made

Rockson-Nelson Dafeamekpor, the Member of Parliament for South Dayi has said that lawmakers behind the anti-LGBTQ+ bill remain resolute in their bid to ensure its passage into law.

According to him, the MPs owe the majority of Ghanaians a responsibility to safeguard the values of the country and promote sexual preferences which are in sync with the country’s general values.

Speaking to Okay FM on the petition by some eminent persons against the passing of the bill, Rockson Dafeamekpor urged the persons behind the memo to promote same-sex relationships in their family and spare the country their ‘alien’ agenda.

Singling out, Professor Emerita Takyiwaa Manuh for criticism, Dafeamekpor charged her to allow her sons and daughters to have such sexual relationships since it is their right.

He said that whiles it is within Professor Emerita Manuh’s purview to promote such culture within her family, he and his colleagues will use every means possible to prevent it from becoming a national practice.

Dafeamekpor said that Professor Manuh’s quest to use the malaria situation in the country to discredit the work of the MPs is flawed as the country has a comprehensive anti-malaria policy.

“Professor Takyiwaa Manuh has sons and daughters, if she can advise them to marry themselves, then it’s her own headache but we won’t allow them to pollute the society. If we pass the law and they are not happy, they should go to the Supreme Court.

The member of the Constitutional, Legal and Parliamentary Affairs Committee of Parliament said that his outfit will invite members of the pro-LGBTQ+ campaign to provide a defence of their memo.

He however assured that nothing will stand in the way of the MPs in passing the “The Promotion of Proper Human Sexual Rights and Ghanaian Family Values Bill 2021.”

“Akoto Ampaw claims to fight for the minority, who are they? They should be an identifiable minority. Akoto Ampaw comes from SALL. The people have no representatives in Parliament, why is he not fighting for them. We have received his memo laced with insults.

“He insulted us in the memo but we’ll not say anything. He said the bill is a conduct unbecoming of a modern parliament. He said we are witch-hunting gays and lesbians in the country. We’ll allow them to defend their memo.”

0
InYour children can be gays but we won't allow you pollute our society – Dafeamekpor to Prof. Manuh

Asempa fie
November 29, 2021
A video that has gone rife on the internet captures the moment an unprofessional police officer was behaving like a...

Asempa fie
November 24, 2021
The Minister of Railway Development, John Peter Amewu has disclosed that an intended sky train project in Accra by the...

Asempa fie
November 21, 2021
An estimated 2,128 new HIV infections have been recorded in the Eastern region, according to the Ghana AIDS Commission. The...

Asempa fie
November 18, 2021
The Minister of Roads and Highways, Kwasi Amoako Attah, in a statement, has ordered the immediate cessation of the collection...

Asempa fie
November 18, 2021
Vice President Dr. Mahamudu Bawumia has come under massive criticism following the announcement of the e-levy or tax on MoMo...