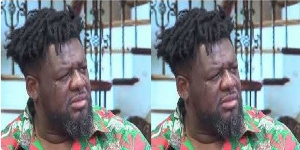 Singing some of his spirit-filled compositions, the likes of Nana Ama McBrown, Bulldog, Arnold Asamoah-Baidoo, and Brother Sammy were seen to be moved by the spirits to get in sync with Mark Anim’s performance.

At a point in time, entertainment critic and artist manager, Bulldog, was seen shedding tears on live TV.

Even though he is perceived by many to be a ‘hard guy’, the spirit of the Lord and Mark Anim Yirenkyi‘s performance really got to the soles of his heart.

Watch the touching moment below:

See also  VIDEO : Pope Skinny calls for peace between him and Shatta Wale

Asempa fie
September 18, 2021
• Afia Schwarzenegger has rained heavy insults on the veteran journalist • Afia wondered why she was the topic of...

Asempa fie
September 18, 2021
In the ensuing ‘beef’ between two of Kumawood’s most liked comic actors, Dr Likee and Lilwin, Yaw Dabo, another popular...

Asempa fie
September 17, 2021
You can’t love Deloris Frimpong Manso -Delay less when it comes to how she manages and runs her ‘Delay Show’...

Asempa fie
September 17, 2021
• TT has rained curses on individuals who have labelled him a beggar • The veteran actor took to social...

Asempa fie
September 17, 2021
• Kohwe has died • The actor's demise has been confirmed by his daughter • Kohwe died at his residence...