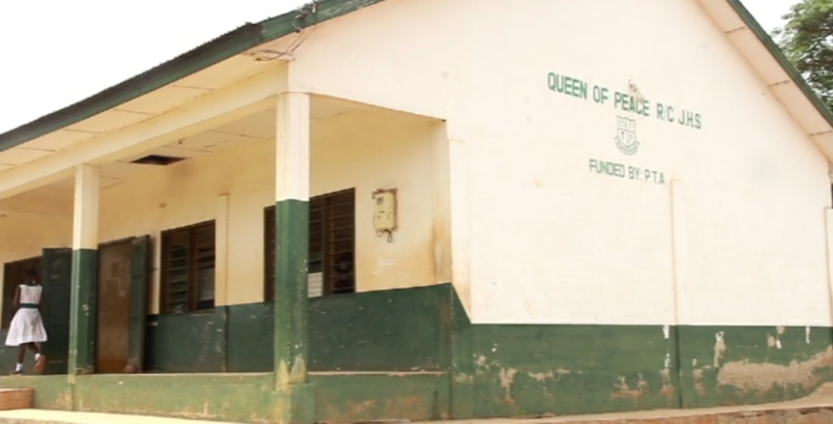 The Headmaster of the Queen of Peace RC JHS was found hanging dead on a mango tree behind his home at Wiawso, a suburb of Techiman in the Bono East Region.

The said incident has thrown the school in a state of shock as both teaching and learning has since been heavily affected due to the demise of the 45-year-old, Paul Dwamena.

According to his colleague, Yevoah Henry Jnr. who was in the school when the incident happened explained that “he came to school on that fateful day, and said he had a discussion with the bishop.”

That was the last Mr Dwamena would ever hear of him before his demise.

Many of the teachers described him as friendly with a genuine concern for the well-being of all his staff members.

Tuffuor Isaac was also a mathematics teacher in the school. He told JoyNews that even though Mr Dwamena was a man of a few words, he was very lively with academic work.

“When he was the Vice Cathedral Youth Chairman, I was his secretary before coming here. If anything, bothers him he would call for a meeting with the academic board. In fact, is a reserved type, as we all know but when it comes to meetings, or when something is bothering you, concerning the school, you go for a meeting. In fact, we are mourning. We are all saddened and in a state of shock,” he told correspondent Anass Sabit.

Contrary to an earlier report by Mr Dwamena hang himself in the school’s staff common room, Isaac says the incident happened, close to his residence.

“I was the last teacher to leave school because I had afternoon classes with the kids which travelled to four o’clock pm and he wasn’t around by then. I don’t know why this fake news is circulating that he hung himself in the school and a student came to find out it. So if a student came to find out in the staff common room, the question, is where were the teachers?”

He, however, called on the police to hasten investigations in order to unravel the actual cause of Mr. Dwamena’s death