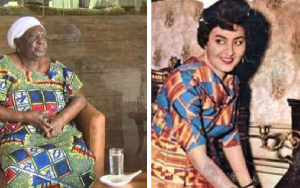 • She revealed that, the military abused her and took her belongings

She served as the lady-in-waiting to the then First Lady Fathia Nkrumah when Ghana gained her independence from the British in 1957.

She was recommended to the then First Family by Governor-General, Lord Listowel who served the country between 1958 and 1960.

Emma Florence Yaa Adinyira Amedahe has been speaking of the ordeal she suffered from the military after Emmanuel Kwasi Kotoka overthrew Osagyefo Kwame Nkrumah in 1966.

According to her, the military which took over the Flagstaff House, now Jubilee House, the seat of government, abused her mercilessly.

Yaa Adinyira Amedahe disclosed that she was slapped and burnt with a lighter. The military who raided the presidency had stolen her belongings as well.

“The Coup cut short so many things, so the one who made the coup, General Kotoka, I don’t like to hear his name at all. Some of us suffered in that coup. For instance, I was the only woman who stayed with the men in the Statehouse. I was slim by then, I looked like a little girl, and not how I am looking today.

“So, when the soldiers drove to the Statehouse, they went to every room and brought all the workers and left their wives. I was the only woman worker. They beat me and the men workers mercilessly and kicked me too. Even when they slapped me and I fell down they kicked me as if I were a football,” Emma Florence Yaa Adinyira Amedahe narrated to JoyNews in a report monitored by GhanaWeb.

“They stamped my back, my waist and my lower abdomen. Ah! I suffered.”

She continued: “One of the soldiers lit a cigarette with his lighter and then used the burning end to burn me. I was shouting, he slapped me again and told me not to shout. I really suffered.

“Whilst some were beating us, some were also in our rooms packing our belongings.

“They took everything from us. They march you to your room and make you carry everything they see on your own head, made sure you dropped them in their vehicle.”

Emma Florence Yaa Adinyira Amedahe noted that she was traumatized after the incident adding, “I had never seen a coup before, I heard about the Congo Coup and I witnessed one in Egypt too. That’s all I knew, but when I saw this one it was terrible. I had diarrhoea even I took water because I was afraid.”

“Madam [Fathia Nkrumah] took me to the children’s room the first day I reported for work, she hadn’t assigned me to anything yet. I bought storybooks for their two children, Gamal and Samuel. By then, they had a nurse who was catering for the children. After one month, Fathia asked me to be in charge of her room, that’s cleaning. She started drawing me closer to herself. When her hairstylist came, she would call me to help him. Her hairstylist was a man by the name of Joseph.

“One day, Joseph finished styling her hair, but madam didn’t like it, she undid everything and later asked me to do it. She appreciated what I did and asked Joseph not to do her hair again because she liked it when I did it for her. She later asked Joseph to train me, he trained me for three months.”

“We used to talk, she even told me how her husband was treating her. I went to Egypt with her so I know a lot of her family members. Fathia saw me as a sister, and I was also like her sister. She once told me Osagyefo didn’t like her and that he was a womaniser,” she said.

“As for me, I never saw Nkrumah as a dictator, maybe outside, he looked like one, but we that he was working with, he loved us, he never spoke English with us. He was always speaking Fante to us. And he loved laughing and playing. So, I know him as someone who plays, he is not a dictator as people see him,” she stated.