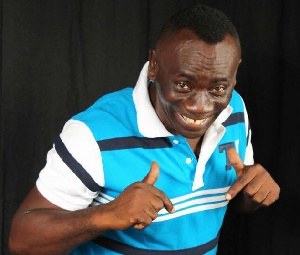 According to him, it was a worrying trend which he could not stop while staying with his parents in the Eastern Region.

Akrobeto said he was always humiliated by the fact that his sisters could disgrace him in public indicating that they always took advantage of that to get him to do whatever they wanted for them.

He said travelling to Accra to live with Apostle Kwadwo Sarfo helped him stop the shameful act because the man encouraged him to stop urinating on bed.

“The day I was brought to Apostle Kwadwo Sarfo, when night fell, I could not go to sleep because I knew if I should sleep I will urinate on my bed. While everyone in the house was asleep, I was wide awake so I don’t urinate.

Apostle Kwadwo Sarfo realized I was not sleeping so he came to ask me to go to bed. He asked me what my problem was and I confessed that I’m a bed wetter and he said I should go and sleep and urinate because he bought the bed and that there was another woman in the house who also urinates. That encouraged me and helped me to stop bed wetting,” he said.