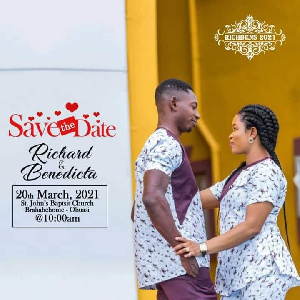 It is a love story with its genesis from a popular social media relationship page, Abena Manokekame.

A would-be couple who met through the Facebook page had announced their marriage ceremony set to take place today, Saturday, March 20, 2021.

For such a beautiful love story, people could not hold back but feel happy for the would-be couple, however, it was all rosy until a lady emerged to claim she had been jilted by the groom after she sponsored him through military training school.

According to Comfort Bliss, she spent so much on Richard Agu that she had to squander her GHC30,000 savings meant to help her further her education.

VIDEO: A Pastor came to pray for me at home but I slept with him instead – Lady Reveals

In a notice served through Abena Magis, the administrator of the popular relationship page, Comfort Bliss has served notification to her ex-boyfriend indicating she will be storming Obuasi where the marriage ceremony between Richard Agu and his newfound lover Benedicta is set to take place, and demand payment of the monies she spent on him all that while.

The peeved Comfort believes her ex-boyfriend scammed her into sponsoring him through military school only to dump her after graduating and gaining employment.

The issue has so far generated into a full-blown conversation across various social media platforms as interested parties have sighted Obuasi-Brahabebome St Johns Baptist Church as the place to be on Saturday to witness the drama that could possibly unfold when Richard and Benedicta walk the alter.

In a latest development, however, Richard Agu in a phone conversation with another Facebook user, Ya Yra has stated that despite going through a relationship with Comfort sometime back, the allegations she has levelled against him could not be possibly true.

According to Richard, contrary to his ex-girlfriend’s claims, she only bought him a pair of socks when he was about to enter the military academy.