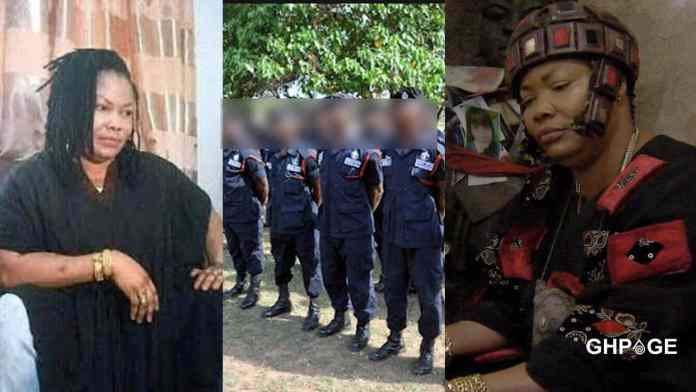 It has become normal these days to turn on your television only to see mallam and juju men advertising and asking people who need money or become successful overnight.

Popular Ghanaian fetish priestess Nana Agradaa real name Patricia Asiedu on her Thunder TV advertise for people in need of money to visit her shrine and patronize her ‘sika gari’ gods which can make them filthy rich.

Over the period of time, a lot of people have visited her and had gone home disappointed because she has allegedly scammed them of the little money they had.

A report has it that over 15 people have reported the scam to the Sowutuom Police but to date, nothing has been done about it since they believe Nana Agradaa is in bed with the Sowutum Police and pays them with the monies she takes from the unsuspecting public who visit her shrine.

It is believed also that some people who fall into the hands of Nana Agradaa fail to report the matter to the police because they fear getting humiliated or too shy to speak out.

One person who has visited Nana Agradaaa narrated his side of the story on how the self-styled fetish priestess scammed him of GHC1000.

According to him, he saw the advert of the priestess saying all that those interested should do is just to come along with GHC1000 which he gathered and took to her.

Upon his arrival at the shrine, Nana Agradaa requested for the money which he presented to her but after taking the money, she requested that he brings an additional GHC15,000 for her to pray over that money adding that failure to that would mean death.

Realizing that he has been scammed, he demanded his GHC1000 only for Nana Agradaa’s macho men to pounce on him and throw him out after receiving some beatings from them.

He continued that after he was thrown out, he saw some others who have also been scammed outside but they were scared to talk because she has allegedly threatened them with death.

Checks at the Sowutuom Police by the source indicated that a lot of reports has been made against Nana Agradaa but the Police don’t act on it because they have been compromised by her.

It concluded that sometimes the Police even tell those who have been scammed not to waste time chasing their monies which have been taken by the priestess.

Asempa fie
April 15, 2021
In a video,@a.rasheeda mocked @dj_point5 for having yellow teeth in US because he claims they can’t get proper toothpaste to...

Asempa fie
April 12, 2021April 12, 2021
Lady-chopped-in-pool As seen from a video fast making rounds on the internet, an asinine lady is seen being chopped by...

Asempa fie
April 12, 2021
A Ghanaian millionaire has recounted how through a mad man on the streets, he got his riches making him a...

Asempa fie
March 29, 2021
Snoring disturbs a lot of people and a lot of relationships Snoring is a natural but very disturbing phenomenon. It...

Asempa fie
March 18, 2021
An elderly Nigerian man was captured shamelessly molesting a lady in a bus. The incident happened in a commercial bus...