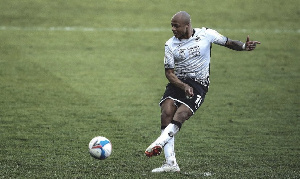 Swansea City manager Steve Cooper is worried over losing talisman Andre Ayew ahead of the international break due to COVID-19 restrictions.

The Ghana captain is expected to join the Black Stars team for the final round of qualifiers for AFCON 2022 later this month.

However, COVID-19 restrictions could force Ayew to spend days in quarantine on his return especially if matches are played in highly affected countries.

Ghana plays South Africa, one of the countries deemed as danger zones for the virus.

But Steve Cooper hopes there will be a way out for such matches, which could include playing at neutral grounds.

“There’s been some stuff written about some Premier League players. I’m not too sure exactly how that’s going to look,” said Cooper.

“We haven’t even had a call-up for Andre yet to say that he’s going. I imagine we would with him being the captain of Ghana.

“But what the stance is going to be on that throughout football, I’m not too sure. But I know there are some decisions to be made going forward. We’ve got four games to play first before that, but I know that’s coming.

“There have been games moved in the Champions League I would imagine for Covid restrictions.

“I haven’t given it much thought but I don’t think this situation is not just going to be about Andre and Swansea, I think there’s going to be a whole host of players that represent countries outside of Europe and with the travel restrictions that are going to be in a similar boat, so I imagine football will take a bit of a lead on it and we can make a decision from there.”

Ayew has been key to Swansea’s promotion chase, netting 14 goals in the ongoing season.