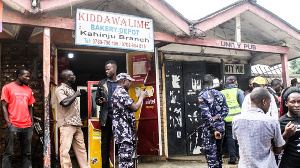 Police authorities have disclosed that the illegal guns criminals use to kill mobile money agents in the various parts of the country belong to security organs.

When asked about the issue, the police spokesperson, Mr Fred Enanga, said: “Speak to [Patrick] Onyango because those are KMP issues.”

Mr Onyango who is the Kampala Metropolitan Police (KMP) spokesperson, without naming any security agency, explained that the guns thugs use were stolen from security agencies.

“Those are illegal guns and in illegal hands,” Mr Onyango said.
“Some guns were stolen by criminals that the joint security agencies arrested during the time there were rampant murders, especially in Wakiso and Entebbe. They [criminals] either completed their sentences or were given bail by court, and now they have come back to square one.”

When asked to comment about the matter, the army deputy spokesperson, Lt Col Deo Akiiki, said: “I speak for the UPDF, I can only comment on the gun if it has a UPDF mark. Security is wide and all guns in security are marked.”

In the two recent murder and robbery cases that occurred in Entebbe, police detectives who visited the scene told Daily Monitor last week that they recovered cartridge casings that look alike. However, the detectives didn’t disclose whether the guns used in the two killings belong to any of the security agencies.

“The first two cartridges that we recovered in November 2020, looked like the one of an AK47 gun, even these three cartridges that we recovered on February 24, 2021 also look like the ones of an AK47, so there is a possibility that this could be the same gun only that we have not yet got any ballistic report to establish the owner of the gun,” one of the detectives said.

The army spokesperson, Brig Flavia Byekwaso, explained through a tweet recently: “Following the presidential directive in June 2018 that all guns must be finger-printed, Joint Security Agencies (JSA) agreed in a meeting to finger-print all guns in a systematic process …”
Mr Apollo Kateba, the head of private security organisation told Daily Monitor yesterday that all firearms for their security guards were marked and finger-printed.

Police began finger-printing guns three months after the presidential directive and nearly 96.7 per cent of firearms used by the Force personnel had been finger-printed by January 6.

In total, as of last month, 67,321 firearms had been finger-printed.
Mr Onyango advised mobile money operators to close their outlets at 6pm and ensure all cash is banked during day. He also advised against moving with cash.

Between July 1 and December 31, 2020, police findings showed that 11 out of 20 guns recovered from criminals belonged to the UPDF, while five were from the Uganda Prisons Service and three from the police Force.