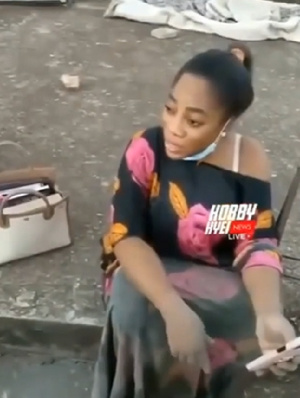 Selling your body doesn’t take you to riches, these are the words of actress Moesha Budong who has revealed that she is now a born again Christian.

In her latest revelation, the former slay queen who served as an influencer for several brands on social media has said that she has sold all her possessions, including her Range Rover to follow Christ.

She adds that her bank account has also been emptied. The one-time actress who flaunted her wealth on social media is now resorting to commercial buses popularly called ‘trotro’ as her means of transportation.

The actress speaking in a video where she was seen covered in dirt advised persons who were around at the time of her sermon to turn away from the desires of getting rich quick and seek the favour of God as some persons who were not fortunate have died in the process.

“See me, the way I am looking but me looking like this, I am happier than those days that you see me in driving Range Rover, travelling. I was not real, I was not a happy child,” she revealed.

Moesha has maintained that she is much more fulfilled and happy in her current state compared to when she was enjoying the time of her life.

“So, all these girls who have looked at my lifestyle, saying that they want to be like Moesha, you have been there and can testify that it isn’t easy. It’s not easy at all, some go and some die. Some go and die. Some of these girls go and die because of the wrong men they sleep with. They take our glory; you know they take out our glory. When God created us, He gave all of us wealth and power. All these men do is sleep with us and take our glory and give us peanuts.”

Many have questioned what might have led the actress to turn a new leaf. It is however unknown whether Moesha donated the proceeds of her sold properties towards the work of God.

0
Inproperties; I pick trotro but I’m happy – Moesha, Video: I have sold my car