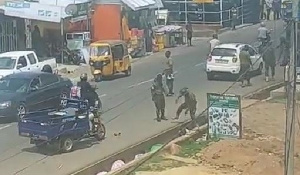 The disciplinary board of Ghana Armed Forces (GAF) has handed down punitive measures to errant soldiers directly and indirectly connected to the July 1 brutality of some residents of Wa, in the Upper East region.

Minister of Defence, Dominic Nitiwul, appearing before Parliament on Thursday July 8, said the measures included outright demotion for three, jail terms for eight officers and transfers for other officials involved but to a lesser extent.

The duty officer, a Lieutenant, will however face trail in the coming days, he added.

“The trial of the duty officer, who is a Lieutenant, will, however, commence on or before Wednesday 14th July 2021.”

“All the above trials and punishments are without prejudice to the outcome of the subjects under various forms of investigation,” Nitiwul explained.

Other officers connected ‘indeirectly’ to the July 1 incident he disclosed will also be impacted: “the remaining soldiers who were also involved in the incident but not identified as brutalising officers will all be transferred out of the region immediately.”

The military high command dispatched a delegation to the region to confer with stakeholders over the incident. The overlord of the area while expressing grave reservations also tasked the state to adequately compensate persons affected by the incident.

The military officers were captured in a viral video physically assaulting members of the public with the reason that a phone belonging to one of them had been stolen.

Asempa fie
September 17, 2021
• List of recommended MMDCEs are out • This was after the vetting committee presented their report to President Akufo-Addo...

Asempa fie
September 15, 2021
Chairman for the National Prophetic And Apostolic Council (NPAAC), Archbishop Elisha Salifu Amoako, has on behalf of the Council pleaded...