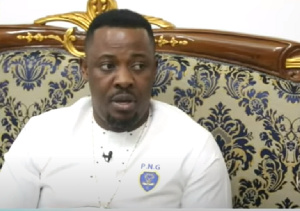 Prophet Nigel Gaisie, Leader and founder of Prophetic Hill Chapel, has prophesied that the New Patriotic Party will not win the 2024 elections.

In an interview with Starr FM, Nigel Gaisie disclosed that the National Democratic Congress will win the election.

He revealed that Vice President Mahamudu Bawumia will at some point replace President Akufo-Addo but his leadership will not go beyond 2024.

Asked to provide meaning for this vision, Nigel Gaisie said that due to previous experiences where he was attacked, he prefers to leave the interpretation to the public.

“I saw the now vice president, wearing the shoe of Nana Akufo-Addo but I didn’t see it past 2024. It means anything can happen between now and 2024 where Dr Bawumia will be the president. I’m speaking figuratively and I have seen it more than four times,” he said.

He said that it has been revealed to him multiple times and urged Bryan Acheampong to contest the 2024 elections as preparatory grounds for his victory in 2028.

“There is a gentleman I saw that I have never met in person. If he is listening, he should vie for the position this year. His name is Bryan Acheampong. He won’t get it in 2024 but he will get it in 2028.

“He should start in 2024 and contest when they open up their flagbearer bla bla…he should contest. He will lose and not get it but in 2028, I saw him holding the Ghana flag. He should take care of himself.”

Nigel Gaisie who insisted that John Dramani Mahama won the 2020 elections stated that Mahama will be president again in his lifetime.

He, however, cautioned him and the NDC to be vigilant during elections.