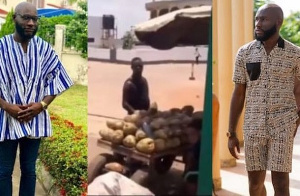 Kenneth Agyapong, the son of outspoken Member of Parliament (MP) for Assin Central, Kennedy Agyapong, has shown an act of kindness to a coconut seller at Madina.

In a video, he was seen standing in front of Kencity Media, his father’s conglomerate when he encountered the coconut seller.

He took out his phone to video the man’s hustle and it caught the seller’s attention who then approached him to ask why he was videoing him.

The son of the legislator then asked the coconut seller if he would take the day off should he buy all his coconut.

After the seller responded in the affirmative he asked him how much all his coconut would cost and he went on to count.

The caption in the video read: “Now he can go home. I’m buying all his coconut.”

Many people appeared touched by the kind gesture and took to the comment section to heap praises on the legislator’s son.

A lot of people do not particularly know the MP’s son apart from a few photos he posts online, but he is actually into business just like his dad.