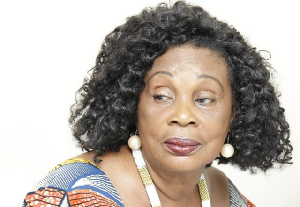 Popular Television personality Patience Omaboe known popularly as Maame Dokono has finally spoken out about claims by one Mrs. Mawutor Rawlings that she gave money to her to leave Ghana because revealing her identity would have been dire to her.

“Maame Dokono knows about this. In 2003, I paid her a visit and told her about my story, but she told me if I don’t keep quiet about it I may die. So she gave me money and I left the country,” Abigail told host Ayisha.

Mrs Mawutor in an interview indicated that her father was the late Jerry John Rawlings and that although her father was aware of her existence he never got the chance to meet him.

She said her mother gave birth to her with the late former President but had to keep it a secret because Jerry John Rawlings had to go to school.

She indicated that she wanted the opportunity to meet the Rawlings’ so that her siblings will recognize her as one of them but that has not seen the light of day.

But speaking in an interview with Accra-based Kingdom FM, Maame Dokono denied claims made by Mawutor Rawlings that she gave her money to leave the country in order to protect herself.

She indicated that she received several calls from people far and near who wanted to know if the claims made by the said woman but she said they were false and that she had no connection with the late former President of Ghana.