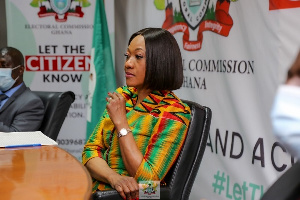 The Wenchi High Court has ordered the Electoral Commission (EC) to produce only the original copies of documents on the Techiman South 2020 Parliamentary results, in three days.

Mr Christopher Bayere Baasongti, the Techiman South Parliamentary Candidate of the National Democratic Congress is praying the court, presided by Justice A.W.K Nawurah, to overturn the declaration of Mr Martin Adjei-Mensah Korsah, the New Patriotic Party candidate as the winner of the contest.

He has, consequently, sued, Mr Korsah, who has since been sworn into office, the EC and the Clerk of Parliament.

At its hearing, on Wednesday, the court ruled that only original copies of the documents would be allowed, and not the photocopied ones earlier filed by the EC.

The court, therefore, gave the EC three days to properly file the documents and further awarded GHC2,000 cost in favour of Mr Baasongti, the Petitioner, for the failure of the electoral management body to properly produce the documents as earlier directed.

The Techiman South Parliamentary Election process was characterised by violence, resulting in sporadic shootings by security Operatives to bring the situation under control.