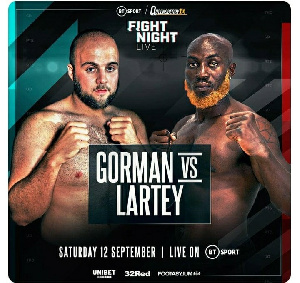 A letter signed by Mr. Peter Zwenes President of the GBA said the licence has been suspended for five years, hence the boxer would not be able to fight in and outside Ghana.

According to the letter, the decision of the GBA was due to forgery of release letter with the signature of the General Secretary Mr. Patrick Johnson to enable him to fight Fabio Wardley in the United Kingdom (UK) last year.

A conduct the GBA deems serious misconduct and a criminal offence.

GPL: Full time results and league standings after week 20
It added that Nii Lartey Harrison on three occasions failed to appear before the Disciplinary Committee of the GBA without reasonable cause.

The GBA said notice of the suspension of the licence would be duly communicated to all relevant sanctioning bodies of professional boxing for the necessary compliance.

Asempa fie
April 26, 2021
Vice President Dr Bawumia showed his other side on Sunday evening after posting a rare sporting message on his official...