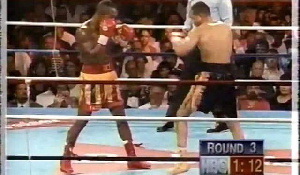 On this day 12 April 1996 (Exactly 25 years ago today) Ghana’s Ike Quartey knocked out Vince Philips of America in round three to retain his WBA world welterweight title.

The fight was on the undercard of Pernell Whitaker vs. Wilfredo Rivera (1st meeting). The fight took place outdoors with the ring surrounded by palm trees.

Phillips entered ranked number 10 by the WBA. It was the earliest defeat of Phillips’ professional career.

According to punchstat numbers Quartey threw 98 power punches in the fight and landed 75%.

A fan-friendly opening round saw both men punch at a high volume. Quartey worked well with his trademark jab and straight right hand and looked to make Phillips pay to get in close.

Phillips came forward, looked to get on the inside, and threw power shots with some success. Phillips went down at 1:40 of the opening round from a slip.

Quartey continued to land at a high percentage in round 2 and peppered Phillips at times with clean shots. Philips, who threw nearly 250 punches through the first two rounds, landed a few power shots in the round as well and closed with a pair of nice right hands.

By the end of round 2, Phillips had developed slight swelling under his right eye. The two continued to trade in round 3, before a pair of right hands at 1:55 sent Phillips stumbling backward.

Quartey chased a retreating Phillips around the ring and threw shots to the head. A combination to the head sent Phillips down across the middle rope at 2:13. He got to his feet at the count of six and despite still being badly staggered was allowed to continue.

Quartey came forward and landed a big right hand followed by two more. At this, the referee stepped in and waved an end to the bout with Phillips unable to defend himself and ready to go down for the second time.

“This is world-class back and forthing.” – Larry Merchant in Round 2

“The guys is strong… My jab is a weapon and I used it to wear him down.” Ike Quartey in the post-fight interview.

I want (Pernell) Whitaker now; Any time, any where, any place. I want (Felix) Trinidad, but I want Whitaker first to prove I am the best in the world.” – Ike Quartey in the post-fight interview.

Ronald Reagan waived the eligibility rules for burial at Arlington National Cemetery and Louis was buried there with full military honors on April 21, 1981. His funeral was paid for in part by former competitor and friend, Max Schmeling, who also acted as a pallbeare

Louis reigned as the world heavyweight champion from 1937 to 1949, and is considered to be one of the greatest heavyweight boxers of all time. Nicknamed the Brown Bomber, Louis’ championship reign lasted 140 consecutive months, during which he participated in 26 championship fights.

The 27th fight, against Ezzard Charles in 1950, was a challenge for Charles’ heavyweight title and so is not included in Louis’ reign. He was victorious in 25 consecutive title defenses.

On this day 12 April 1989 (Exactly 32 years ago today) Sugar Ray Robinson died in Los Angeles at the age of 67. Robinson was buried at Inglewood Park Cemetery, Inglewood, California.

Robinson’s performances in the welterweight and middleweight divisions prompted sportswriters to create “pound for pound” rankings, where they compared fighters regardless of weight.

He was inducted into the International Boxing Hall of Fame in 1990.] He is widely regarded as the greatest boxer of all time, and in 2002, Robinson was ranked number one on The Ring magazine’s list of “80 Best Fighters of the Last 80 Years”.

Asempa fie
April 26, 2021
Vice President Dr Bawumia showed his other side on Sunday evening after posting a rare sporting message on his official...