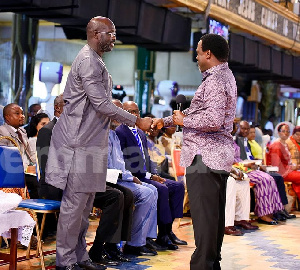 President Pro Tempore of the Liberian Senate Albert T. Chie has instructed the Secretary of the Senate to review the accusation as levied against the body by Mr. Sando, accord him due process and report to the Senate’s leadership after the Easter Break.

Sando’s accusation against the Liberian Senate comes at a time the Central Bank of Liberia (CBL’s) request to print the L$48bn has caused stir here due to the controversies still hanging over billions of Liberian dollars earlier printed as well as a controversial US$25m mop up exercise, among others.

Sando was recently suspended by his boss Senator Karnga – Lawrence for one month without salary for accusing her colleagues.

The LP political leader and chair of the opposition Collaborating Political Parties (CPP) Senator Karnga – Lawrence came down hard on her party stalwart for putting her colleagues against the public.

In a statement issued recently, the Senate welcomed the decision of Senator Lawrence to have taken an immediate step to suspend her Administrative Assistant Mr. Daniel Sando who has accused members of the Senate of taking bribe to sign a resolution for the printing of a family of new banknotes.

PHOTOS: Checkout 5 World Billionaires In Their Old Ages But Have No Children To Inherit Them

The Senators however thanked Sen. Lawrence for the initial step taken to suspend Mr. Sando for a period of one month without pay. The report of the Secretary of the Senate will determine whether additional sanctions are justified to be imposed against him.