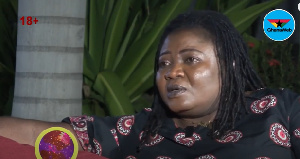 • Men have been advised to ensure that women climax during sex

• According to Aunty Ami, both partners must experience orgasm during sex

Lifestyle coach and Sexpert, Aunty Ami have advised men to go the extra mile in assuring that their partners (women) are satisfied during lovemaking.

According to her, a man must not back out of sex once they are ejaculate or orgasm.

Speaking on GhanaWeb TV’s Moans and Cuddles with Paulina Dedaa Opoku, Aunty Ami posited that most women do not experience orgasm in situations where their partners (men) are usually first to climax fail to proceed with lovemaking after they orgasm.

“It is difficult for a man to orgasm and then start all over again. The man has had his satisfaction, it is up to him to help the woman to also come. What do you do? This is the time to use your ‘organics’ like you are playing the organ; the fingers. You will have to play the woman to come. The fingers are one of the strongest tools during sex and also the tongue, they are very strong aside from the organs.”

Adding: “If you use the organ and you don’t get to where you want to be, introduce plan B thus the tongue or the ‘organs’. You can use your tongue to really lick her to ecstasy.”

0
InMoans and Cuddles: ‘Orgasm is not the end of sex’ – Sexpert reveals

Asempa fie
September 18, 2021
A middle-aged woman, Janet Korley, who travelled to seek greener pastures in Lebanon sometime in the mid-'90s has disclosed how...

Asempa fie
September 17, 2021
Ghanaians especially some of the youth are mindless about how they will survive, in fact, they will do just anything...

Asempa fie
September 9, 2021
A lot of times, we hear stories of couples getting stuck inside each other during sexual intercourse. While some people...

Asempa fie
September 8, 2021
A video clip showing two young women ostentatious parading themselves on camera as lesbians has hit the internet space. In...

Asempa fie
August 19, 2021
Afia Schwarzenneger has reacted to the viral audio where she was accused of plotting to destroy the former president of...