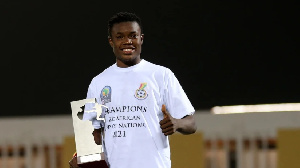 The Steadfast FC teenager has come under the limelight after excelling at the 2021 Total CAF U-20 Africa Cup of Nations (AFCON) tournament hosted in Mauritania.

Now being chased by a host of clubs, FC Basel is reportedly ready to pay $1 million for the services of the AFCON U-20 best player.

According to Kumasi-based Oyerepa FM, the Swiss top-flight league club in its proposal is ready to do the initial payment of $500,000 and the balance of $500,000 when the Steadfast player attains 18years.

If a deal is reached and Abdul Fatawu Issahaku joins the club, he will receive $15,000 monthly.

After turning 18, the wage will automatically be increased to $30,000.

At the recently ended U-20 AFCON, Abdul Fatawu Issahaku finished the tournament as the best player on the back of his outstanding performances for the Ghana Black Satellites.