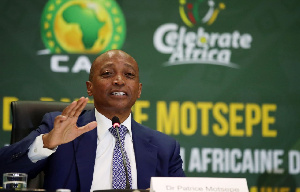 CAF President Dr. Patrice Motsepe met the press on Tuesday, March 16, 2021, in Johannesburg, South Africa for a first speech in his native country since his election.

Surrounded by heads of South African football and COSAFA Zone, Dr. Motsepe presented his program for the coming months and especially CAF objectives for the next four years.

Earlier during the 43rd CAF General Assembly which saw him elected CAF President, Motsepe vowed to visit the 54 CAF Member Associations in the next nine to twelve. months. He confirmed that again in his press conference.

Aware of the imperatives and urgency around African football, Motsepe also specified the organization of more annual meetings with the leaders of the various MAs.
“I will hold two more meetings this year with all the presidents of CAF Member Associations and we will discuss urgent measures there,” he said.

Rich in his experience in the business world, President Motsepe said “I will not be the president of an organization which, in 4 years, will not have made significant, tangible, practical and accessible progress. It will not happen.

“We have to stop being pessimistic. It is important to identify our weaknesses and failures, and we will correct them”.

“The future of the most continental organization is optimism, a positive attitude. We can and will succeed,” he confirmed.

Several subjects were discussed during the press conference, in particular the choice of the new General Secretary and his team of Vice-Presidents.

“We are lucky to have Veron Mosengo-Omba on board,” he said, recalling the journey and experience of the DR Congo native who left his post as FIFA Director of the Member Associations division to serve CAF.

“I had to choose 5 vice-presidents, and for the first time in the history of CAF, we have an English-speaking president and French-speaking vice-presidents. In addition, we had never had a female Vice-President before. So we wanted to have leaders from all parts of the continent, to make them feel concerned.”

One of the first decisions of the Executive Committee chaired by Dr Motsepe, the day after his election, allowed a woman, Kanizat Ibrahim to become CAF fifth vice-president, beside the appointments of Augustin Senghor, Ahmed Yahya, Suleiman Waberi and Seidou Mbombo Njoya respectively as first, second, third and fourth CAF vice-presidents.

Asked what would be the new periodicity of the African Cup of Nations, the continent’s flagship event, Dr Motsepe was clear: “AFCON, at present, must take place every two years”, adding, however, that it was not closed to a discussion with partners.

0
InAFCON will be played every two years - New CAF President