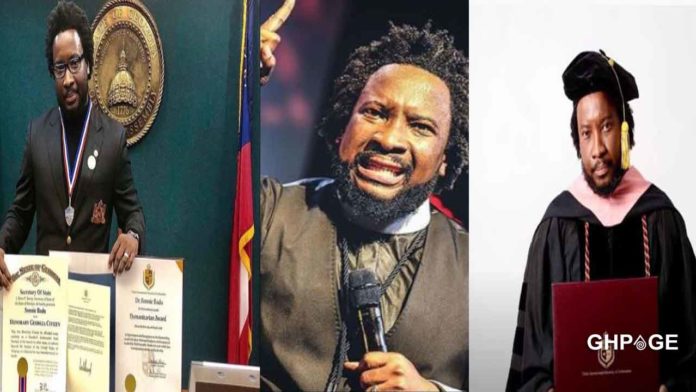 UK based Ghanaian Gospel Musician and founder and General Overseer of Rock Hill International Chapel, Sonnie Badu has finally reacted to allegations of him buying fake Doctorate Degrees in 4 months.

For some time now, Dr Sonnie Badu has been under serious public criticism following his claims that he has bagged 3 Doctorate Degrees in 4 months, this according to netizens is kinda weird.

On social media, netizens have questioned the timeframe within which he (Sonnie Badu) obtained the degrees and the merit on which it was awarded to him. These questions need answers.

Well, just as we were all waiting, from the horses own mouth, Dr. Sonnie Badu has reacted via a video obtained amid the massive trolls on the internet appearing very raged.

In the video, the Leader of Rock Hill Chapel said the trolls going on social media doesn’t move nor change him because he knows the mindset of Ghanaians that’s why he doesn’t live here.

‘I know the mindset of my people that’s why I don’t live there and if we (Ghanaians) keep on going this way – trying to pull others down and killing our heroes – will our nation grow?‘ he stated.

Watch the video below- Sonnie Badu Reacts to the allegations against him;

According to him, he’s working so hard. He, however, expressed disappointment in Ghanaians.

Pointing out that he would have loved for anyone who has questions about his degrees to e-mail him to talk as brothers rather than going on social media to peddle falsehood about him.