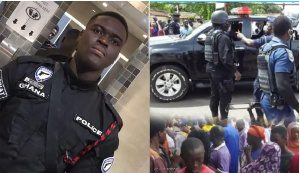 • The police has been on a manhunt for the killers of one of their own when armed robbers attacked a bullion van on Monday, killing a constable on board

• An eyewitness has been explaining how he narrowly escaped the crossfire

A man who witnessed the happenings of the ghastly armed robbery at Jamestown in Accra that led to the killing of a police constable and a middle-aged woman who was caught in the crossfire, has been speaking about what he saw.

In his narration to TV3, the eyewitness said his instinctive decision to rather go for a tot of Akpeteshie (a locally distilled alcohol) instead of the lunch break he was supposed to take, gave him the narrow escaped.

The man who work in a mechanic shop explained that shortly after moving from his shop, the sporadic gunshots from the armed robbers started and a bullet even hit one of the cars he was working on before he moved.

The unnamed man concluded that had he not made that decision to purchase GH₵1.00 worth of the popular alcoholic beverage, he might have been caught in that crossfire, dying in the process, reports ghbase.com.

Reports indicated how a distress call by telephone from Jamestown of the activities of some three armed men on two motorbikes with unidentified numbers, attacking and robbing a bullion Nissan van with registration number GT 8592 W with the inscription Mon-tran company embossed on it.

This led to the killing of the policeman on-board following which the Jamestown district police command and men rushed to the crime scene only to find the said van parked in the middle of Adedenko metal market road with three-door glasses shattered.

The reports stated further that the body of No. 58449 g/ Constable Emmanuel Osei of the National Swat found in a pool of blood at the front seat.

“The driver known only as Wisdom was not met at the scene. Onlookers led police to a wooden structure where the body of one Afua Badu aged about 40 was found lying prone in a pool of blood.

Spot enquires revealed she was pursued and shot at for raising an alarm. police also located grace Essel, one of the officials who escaped unhurt took refuge in the community. She has been sent to the police hospital via papa 52 for treatment.

Bravo tango one and team visited the scene and conveyed the two bodies to the police hospital morgue for preservation and autopsy. Police will visit the Korle-Bu Teaching Hospital where the driver of the van is alleged to have gone for treatment,” preliminary investigations revealed.