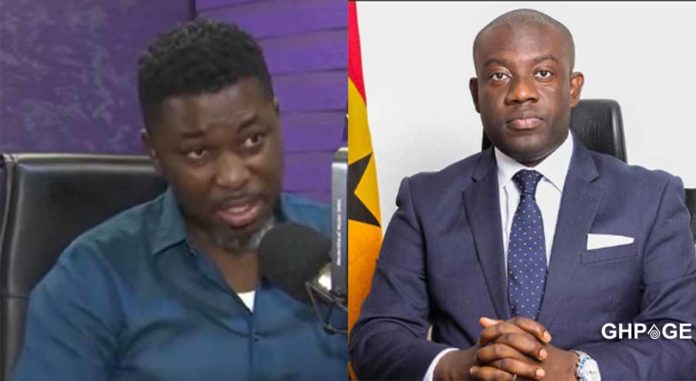 Political activist Kwame Asare Obeng popularly known as A Plus without mincing words has descended heavily on the Minister for Information, Kojo Oppong Nkrumah.

In an interview with Nana Aba Anamoah, Kwame A Plus described the Member of parliament as disrespectful and ungrateful.

According to A Plus, he was instrumental during the time Kojo Oppong Nkrumah was campaigning to be a member of parliament at Ofoase Ayerebi in the Eastern Region.

The controversial musician further stated that he was very disappointed when Oppong Nkrumah described him as disgruntled for criticizing the NPP government.

A Plus added that he used to have a very good relationship with the Information Minister but his comment about him was unfortunate.

“Politicians do not respect and are very ungrateful. I do not mince words and if I see Oppong Nkrumah, I’ll tell him to his face that he is very disrespectful. I just want to put it to Kojo that that was an unfortunate comment and he is very ungrateful”, A Plus stated.

Watch the interview below;

Kwame A Plus further debunked rumours that the Information Minister used to watch pornographic movies in his house.

0
InWatch video: Kojo Oppong Nkrumah is disrespectful & ungrateful -A Plus