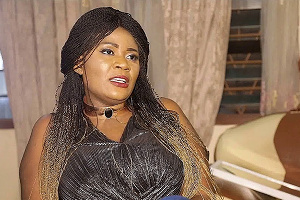 It was a healthy conversation on Peace FM’s Entertainment Review, Saturday, until Counselor George Lutterodt begun his submission on Nayas’s relationship with gospel musician Ernest Opoku and all hell broke loose.

The actress had been invited to the studio and her interaction begun with her past relationship with the gospel musician which was shrouded by controversy.

A pregnant Nayas in 2018 stormed the studios of Adom FM when the gospel musician was on air for a live worship session and gave him some lashes. She later rationalized her decision as she argued that she had been expecting the musician to call and apologise to her for abandoning her at a time she had taken seed for him.

On Peace FM’s Entertainment Review, March 6, 2021, Nayas who is now married wished the issue would not be revisited taking into cognizance the fact that both had moved on and as far as she is concerned, she holds no grudges against her ex-lover.

But George Lutterodt insisted that it would be appropriate for Nayas to render an unqualified apology to Ernest Opoku for her conduct regardless of her claim that there is no friction, stressing that sleeping dogs would not lie until Nayas does the needful.

“Beg Ernest Opoku,” Lutterodt said in his submission as he engaged in a verbal altercation with Nayas.

He claimed that as a friend to Nayas, it is best to counsel and rebuke her openly for refusing to act like a mature person but that claim was the straw that broke the camel’s back.

“If I’m your friend, speak to me off-air; don’t come and say stuff on radio… Stop the nonsense. It’s enough!” Nayas fumed.

The anger is building up! – Yvonne Nelson tells Akufo-Addo

Due to how tempers arose, the host of the show Kwasi Aboagye was compelled to take a musical break but that was not enough to douse the tension. Nayas after the break apologized to listeners for the near-blow encounter with Lutterodt but warned that she will not sit unconcerned should she be disrespected.

“I apologise to listeners [but] those who don’t know me judge me wrongly. I’m not a bad person, I don’t even like talking. But when you have things on your chest and fail to unleash them, it can cause depression.

“I know counselor is older than I am. I never wanted to speak against him but since my issue with Ernest, he has insulted me severally. Whoever messes up with me, I’ll vent, I’ll come at you. People have taken me for granted for too long,” she roared.