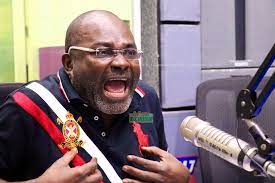 Assin Central lawmaker Kennedy Agyapong has said he will assist a future government of the National Democratic Congress (NDC) to reclaim all state lands that have been sold to members of his party, the New Patriotic Party (NPP).

Mr Agyapong warned his party members that the NPP will not be in power forever therefore, they should desist from sharing state lands among themselves.

The businessman said these on his television network on Monday, April 26 while recounting his ordeal at the Lands Commission after he made payment covering a plot of land he bought yet was not given to him.

His money was also not refunded, he said.

A livid Kennedy Agyapong said he took the decision to buy lands at a time some of his friends in the NPP are just grabbing because he wanted to have the freedom of speech to criticize both the NDC and the NPP.

He added “I will personally assist the NDC and show them all the state lands that you bought for them to reclaim it.

“Note that that the NPP will not be in power forever.”

He further warned an aspiring National Chair of the NPP Mr Stephen Ntim who is board chair of the Lands Commission that he will lead a campaign against his bid because the land that he genuinely bought was not given to him.

He said when he complained to Mr Ntim regarding his predicament he was told to go and look for another plot of his choice and report back to the Commission for the necessary documentation to be done.

This he said he found disturbing, for which he will be campaigning against Mr Ntim

“If you won’t give me the plot of land that I have paid for with receipt to show, what about my money?” he asked.