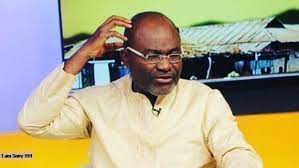 In February 2020, a video surfaced of the founder of the Lighthouse Chapel, Bishop Dag Heward Mills invoking God’s wrath on some of his critics.

Citing portions of the Bible, Bishop Dag Heward Mills invoked curses of leprosy among others on the people.

More than a year after the video went viral, Kennedy Agyapong, a Ghanaian lawmaker and crusader against ‘false prophets’ has chanced on it and he is shocked by the actions of the Lighthouse leader.

Kennedy Agyapong on Monday April 27, 2021, commended Dag Heward Mills for being in the ministry for over four decades.

He was however unhappy with the conduct of the pastor as captured in the viral video.

He questioned why a man of God will invoke curses on people for criticising, stating that a for a preacher of his experience, he should have known better.

“But why should a pastor curse someone for criticising him. What a shame. What is going on in this country. Is he not the one who has established churches in abroad?. A friend of mine has very intelligent kids and he has convinced all of them to leave Pentecost and become pastors in his church. Brilliant boys who were engineers and accountants and I don’t know how he managed to convince them to become pastors in Lighthouse”.

“The greatest commandment is love Thy God as yourself. The second greatest is love thy neighbour as yourself. If you love your neighbour, you won’t steal from him, you will forgive him when he faults you. So, for a prophet to curse people the way he did, he’s a devil. He is more than evil. Nobody is ready to tell him but I have told him. If you curse people like that, you are evil”.

Kennedy Agyapong also asked Reverend Obofuor to stop defrauding people in the name of God else he will expose him.

“God’s servant is the one who is truthful to his fellow man. This is how Obofuor operates his church. Obofuor has to be careful. Obofuor you have to have be careful else whatever discussion I had with you I will say it. You cannot continue deceiving and amassing wealth from the ignorance of people. God will not bless you.

“The new testament also said that in the end there will be false prophets who will claim I’m the Christ, Messiah and the Saviour. That is exactly what we are experienced and it tells you that we are in the end times. When you get that sign then you know that the end is near so if you have to change, do it now,” he said.