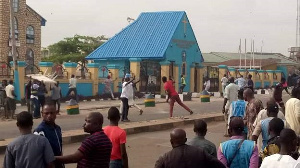 Tension run high in Ilorin, capital of Nigeria’s Kwara State as Muslims and Christians violently clashed over the use of hijab in state schools controlled by the church.

The violent exchanges of today were specifically at the Baptist Secondary School where persons of both faiths threw stones and plastic chairs at each other in the standoff.

Police fired tear gas in order to restore order, multiple local media portals reported. A BBC report said only one out of the 10 affected schools allowed students with hijab to enter classrooms.

The remaining insitutions insisted that they will not allow students in despite the state government’s orders to do so.

Leader of the Baptist Conference in Kwara insists they will “defend their faith and property so long as the Kwara state government refuses to obey the rule of law.”

“We will not allow hijabs in our schools, it is simple as that. This is a Christian Mission school,” he added.

Earlier on Tuesday, the state government ordered the re-opening of ten schools that were shutdown because of controversy surrounding the Muslim head covering.

The government insists that wearing the hijab bordered on the rights of pupils and students but the school management stress that they maintain control over dress code for the schools.