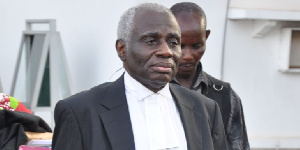 Tsatsu Tsikata has disclosed the two things that shielded him from bullying at Mfantsipim Secondary School.

Tsatsu got into the school a ‘tiny young man’ at age nine with a reputation of being a brilliantly intelligent guy.

Tsatsu says his size protected him from bullying as the seniors always felt he was too little for such treatment.

“I got to Mfantsipim when I was nine and the beauty of being that little was that everybody protects you so you don’t experience any of the bullying. There was a lot of bullying but they didn’t touch me,” he said on Pan African TV.

Another thing that did the trick for Tsatsu was his asthmatic condition. Being asthmatic, Tsatsu said he was granted special dispensation to smoke asthmatic cigarettes to control his condition.

Having been authorized to smoke the medicine, Tsatsu says he became a favourite of student smokers who often came to him for a stick of the medicinal cigarette so that when they are caught they could use it as a defence mechanism.

Tsatsu is grateful for all this experience which he believes shaped him and the person he became.

“The other aspect of it is that in those days I was quite asthmatic and I’m still asthmatic. In those days, one of the asthma medications was the asthma cigarettes which you inhale and those sought of helped clear the system of asthma.”

“I became a favourite of some of the bad boys in school because they saw that I was the only person who was allowed to smoke so occasionally they would come for a stick of asthma cigarettes in the hope that if they are caught smoking they would say that it’s the asthma cigarette. I was the only person that had authorisation to smoke. I became their friends because they needed my cigarette to show that they also had asthma,” he said.

Asempa fie
April 15, 2021
In a video,@a.rasheeda mocked @dj_point5 for having yellow teeth in US because he claims they can’t get proper toothpaste to...

Asempa fie
April 13, 2021
Nana Agradaa and Police It has become normal these days to turn on your television only to see mallam and...

Asempa fie
April 12, 2021April 12, 2021
Lady-chopped-in-pool As seen from a video fast making rounds on the internet, an asinine lady is seen being chopped by...

Asempa fie
April 12, 2021
A Ghanaian millionaire has recounted how through a mad man on the streets, he got his riches making him a...

Asempa fie
March 29, 2021
Snoring disturbs a lot of people and a lot of relationships Snoring is a natural but very disturbing phenomenon. It...